A beautiful green parrot made famous by Alexander The Great, Alexandrine Parakeet is one of the largest parakeets with a size ranging anywhere between 22 to 24 inches. Many say that the difference can be accredited to the gender of the bird with males being on the upper end of the spectrum and females being at the other end. But this ain’t the truth completely. It is just a possibility but not a compulsion.

Many females also tend to be on the larger side. Hence, this way of determining the gender of the Alexandrine parakeet is a total fail. So, which is the fail-proof way of sexing Alexandrine parrots?

Unlike many other parrot species, Alexandrines are the proud dimorphs. This means that males and females can be told apart simply by looking at their distinct colors and markings. There is no need to use unreliable hit-and-trial sexing techniques like the size or weight of the bird just to tell the gender. Also, there is no need for DNA testing to be sure of the gender, just like some species like budgies or conures. That said, there might arise the need for DNA sexing. So, why does this need arise when the Alexandrines are dimorphic?

The only time one can be unsure of an Alexandrines’ gender is when the bird is a chick and hasn’t even fledged yet. And if one happens to adopt the bird in such a situation and wants to know the gender of the bird, there is only one way out: DNA Sexing. The young Alexandrines are almost identical to the female Alexandrines but sport a duller plumage and shorter middle-tail feathers leading to shorter tails. It is only after their 3rd year of birth or so, that they gain adulthood and their dimorphism. That said, sexual maturity is subjective and can be attained sooner or later by a particular bird based on genetics or other such facets.

Many times, adult feathering is attained by the age of 18 months. Few birds also have it by the age of 1 year. But this doesn’t give the certainty of a bird’s gender as they might not have attained clear markings. The best way to sex a young Alexandrine after the first molt is to look for the dark-black feather on their neck rings and/or pink feathers on their nape band. If this cannot be spotted, go the DNA sexing route for sex determination.

After gaining sexual maturity, Alexandrines can easily be sexed. And with five subspecies including the nominate one, they all have colors and markings that set them apart not only from each other but from their female counterparts too. Let’s learn to sex them all visually:

Scientifically known as P.e. Eupatria or more commonly so; Alexandrine Parakeet, this subspecies also happens to be the nominate race of Alexandrines. The bird has an overall green plumage accompanied by a light bluish-gray sheen on both cheeks and nape. The belly is yellowish-green and there is a reddish-brown patch on both shoulders that can generally be seen right after their first feathering. The irises are yellowish-white with light grey rings around the eyes. The bill is huge and red with yellow tips.

After recognizing this subspecies, it’s time to separate their genders. For this, look for dark-black feathers on the front side of their neck ring that turns to pink as the ring moves towards the nape. Also, there’s a light bluish-grey band just above this black-pink neck-band. That’s the male Alexandrine.

P.e. Nipalensis or the Large Indian Parakeet or the Nepalese Alexandrine Parakeet is the largest of all the subspecies by measuring 24.5 inches from head to tail. This makes the bird ‘the largest parakeet in the world’. Though the species looks very similar to the nominate species, there are still visible differences that make them distinguishable. The first difference is the greyish-green wash on the chest and belly, and a bluish tinge on the cheeks and nape.

Once the subspecies is identified, pick out the male by spotting comparatively larger black and pink bands on the nape.

Scientifically known as P.e. Siamensis, this subspecies has many names like Thai Rose-ringed Parakeet, Siamese, or Laos Alexandrine Parakeet. This subspecies is the smallest of all five subspecies with just 22 inches from head to tail. Though smaller than the nominate race, it is much similar to it when it comes to colors and markings. But what distinguishes it from the nominate race is a lighter red shoulder patch due to the absence of any brown tinge; a yellow wash on the face and neck; and a smaller beak.

Pick out the male by looking at the bluish sheen on the nape and head and even on the crown in a few birds.

And to tell the males apart, look for a very thin pink band at the neck and a narrow light-blue stripe above it.

With P.e. Magnirostris as scientific name and Large Andaman Parakeet or Andaman Island’s Alexandrine Parakeet as common, this subspecies happens to be slightly larger than the nominate subspecies. Not only the length, but the Large Andaman Parakeet also happens to closely resemble the nominate race. That said, there are a few differences that, if seen with a keen eye, render the subspecies distinguishable. The shoulder patch has more red and less brown making it appear darker, the bill is larger, and a whitish-grey sheen on the feathers of the chest and abdomen.

And for the visual sexing of the male birds of this subspecies, look for the large pink band at the nape. The blue customary blue sheen above the nape bands is lightest in some birds or absent in others.

The colors and markings of the Alexandrines females can be easily noticed in every subspecies. Though the major patterns are the same, the difference comes around the neck and nape bands.

Alexandrine Parakeet females share all the colors and markings with their male counterparts. But what makes them recognizable is the absence of pitch-black feathers on the neck-band and the pink ones on the nape-band. That said, females often sport a bluish-grey ring around their neck in a comparatively darker shade when compared to that of males’.

The female Large Indian Parakeet is identical to the males minus those thick bands on the neck and nape.

The female Thai Rose-ringed Parakeet, again, lacks the neck and nape band, along with the bluish sheen on the nape and head area. The rest of the colors and markings are shared by both genders.

The female Large Burmese Parakeet has the same colors and markings as that in males but with an absence of the thin band at the neck and the nape.

The female Large Andaman Parakeet shares all the color patterns with their male counterparts except the band at the nape. Also, the blue sheen just above the nape band area is more noticeable.

The identity of an Alexandrine not only faces threat just from a probable mix-up with the opposite sex. There is another competition: an Indian Ringneck Parakeet. This species often takes away the recognition from the Alexandrines due to:

And the cross-breeding of both the species makes the situation worse where many assume both these to be conspecific or related in other ways. But for the keen eyes, the distinct points are many:

With so many visual distinctions, it is almost impossible to not find out an Alexandrines’ gender correctly. And the patterns also help to set them apart from the other similar species that have certain similarities with them.

All About Eclectus Parrot 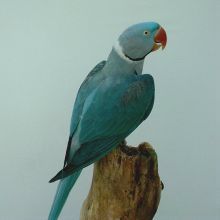 The Blue Alexandrine parakeet is named after Alexander the Great and was prized for nobility and royalty since ancient times. Alexandrine parakeets are one of the most commonly sought parrots globally. Due to their affectionate nature, Alexandrine