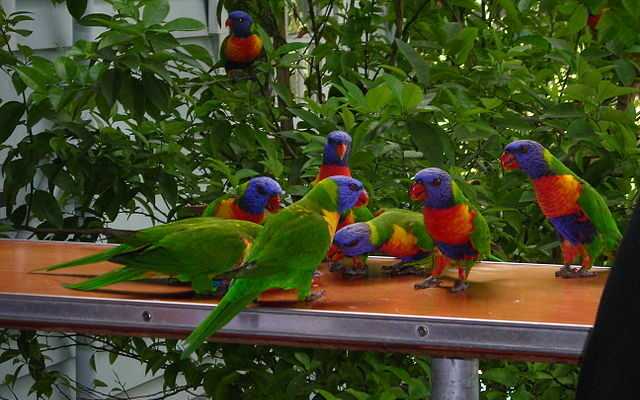 Lorikeets are medium-sized, exceptionally colorful, and vocal species of parrots. They are found in Australia, southeast Asia, Polynesia, Indonesia, and New Guinea. They are known for their colorful plumage and their vocal ability. Most species are from the lowland rainforest and cloud forest.

They travel far and wide in search of what to eat in the wild. Lorikeets do not travel alone. They sometimes move in a few numbers and also in large numbers depending on the habitat conditions. In the wild, they feed mainly on insects, pollen, fruits, nectar, and seeds. They have flat tongues with long brush-like bristles that make it easy for them to suck nectar from flowers once they stick their tongues to a flower. These birds are considered Australia’s fruitiest colored birds.

Rainbow lorikeets are the most popular types of lorikeets. These birds are not only attractive, but they are also very intelligent and vocal. They love to talk and have the ability to learn so many words. They can chatter and make noise all day and make the people that are sensitive to noise uncomfortable. If you are the kind who gets nervous easily with noise, you may want to reconsider having it as a pet.

However, some people who love to interact and talk to their birds find them fantastic mainly because of their conversational style. And because they are tall, they need a sturdy cage. They need a comfortable cage to make living comfortable for them. Therefore, the minimum size should be four feet long and a wideness of a couple of feet. The height of the cage should be a minimum of three feet. If you have enough to make a taller and wider cage, it will make it easier for the birds to explore.

Rainbow Lorikeets need enough attention and playtime. They demand attention whenever they feel ignored. Playtime, however, is good for them as it makes them exercise and stay healthy. They need at least three to four hours in a day to play out of their cage. A long time of play is better if available. They can become companions for a more extended period up to 20 years if properly cared for.

They should be prevented from feeding on their droppings as it is hazardous to their health. Because Lorikeets are similar, the same thing that applies to the Rainbow Lorikeet applies to the rest.

These birds are very colorful and are similar in look to the Rainbow lorikeet. They have almost all the rainbow colors on their plumage. The front of the crown is dark bluish mauve.

The upperparts are colored a vibrant green with specks of reddish in the middle of the bases of feathers and bright yellowish-green on the collar. The Iris is colored orange-red with gray legs. There are several other colors distributed on its body.

It is difficult to tell the male from female as both sexes are very similar. The immature coconut lorikeets are more silent than adults with the bill and the irises colored dark brown.

The Red-collared Lorikeet is indigenous to North Australia, where they populate the lowlands. The name “Red-collared lorikeet” is derived from the noticeable red color on its collar. They hybridize with the Rainbow Lories in Australia.

They favor humid forest areas, swamps, woodlands and can also be found in populated areas. Red-collared Lorikeet is the largest of all types of lorikeets, with a length of 29 cm and a weight of approximately 130g.

Red-collared lorikeets are often confused with the Rainbow lorikeet because of their similarities.

The scaly-breasted Lorikeet is different from other lorikeets. They are covered in green feathers with a few streaks of yellow. However, their underwings are a mixture of red, orange, and black.

They are populated on the east coast of Australia, most especially in the lush eucalypt forests and woodlands where they have been found mingling with other lorikeet species. They are known by many even though they are different. It is advisable to keep them in single aviaries as they also exhibit aggressive behavior like other lorikeets. That is why you should not keep many lorikeets in a single cage because they can attack one another.

The varied Lorikeet is almost totally covered in green feathers. Its head is colored in a tropical cocktail color consisting of blue, violet, and red shades with a bit of yellow streaking across its upper body.

Varied Lorikeet is mainly found in northern Australia, including North Queensland, Western Australia, and the Northern Territory, where it can be seen among eucalypt and paperbark blossoms.

Like the purple-crowned Lorikeet, the musk Lorikeet is not popular commercially. It has a red mark on its face that looks like a mask and a blue-colored crown.

The Musk Lorikeet feeds on odd insects, unlike other Lorikeets that usually feed on nectar from flowers. They are seen dominating Victoria, New South Wales, lower parts of South Australia, and Queensland.

They are more challenging to keep than the Rainbow Lorikeet. They are small in size and can be aggressive too. They should be isolated, especially during the breeding season. They do not talk but can mimic sounds which sound pleasant to the ears.

Musk Lorikeets can easily be corrected when they show some aggression to humans. They can be offered sweet things to gain their trust by providing them fresh berries and fruit. Once that is done, they will become less aggressive or stop being aggressive totally.

Purple-crowned Lorikeet is arguably the cutest of all, with its purple-colored crown giving the bird its name since its discovery. It has yellow-spotted cheeks and greeny-blue breasts.

It is found in South Australia and is often called a ‘blossom nomad’ because they congregate in large numbers in strange areas or places they have visited for a long time. The purple-crowned Lorikeet is challenging to keep, and so it is not popular as a pet. The challenges that its owners have reported lowered its demand and made its price low.

The not so sad news is that they don’t last long as other species. They live only 7-10 years.

As you might have guessed, the little Lorikeet is smaller than the other Lorikeets. And because of its smaller size, it should not be kept in cages but be allowed to fly around to maintain its physical and mental health. It is a calm bird that can live with other small parrots, finches, and doves.

Many people do not like to have the little Lorikeet as pets; they instead go for the rainbow Lorikeet or Scaly-breasted Lorikeet because of their intelligence, ability, and lifespan; because little Lorikeet only lives 10-15 years under good living conditions.

All about Mustached Parakeet