Lovebird comparison with Other Parrots

The decision to adopt a parrot starts with a search to look at ‘best beginners parrot species’. And most of the results would have lovebirds, budgies, parrotlets, cockatiels, or Quakers.

More often than not, the majority of us get inclined towards the lovebirds, probably thinking that they are the lovey-dovey and the gentlest species of all. But the decision to adopt a pet parrot shouldn’t be based on which name is supposedly appealing. The decision must purely be rational, based on their behavior and time as companions.

This article would let one decide which parrot he should go for based on the species’ personality traits, training, and such factors that might make one reconsider his choice. So, let’s get started.

An extremely active, playful, and curious species, lovebirds are like big blasts in small packets. They are cuddly if they happen to form a great bond with their owner. But such a bond wouldn’t be a possibility if they are kept in pairs as love birds tend to choose their kind over humans.

Also, owing to their strong personalities, they can sometimes be extremely aggressive, bringing their super screechy and biting mode out.

Budgies are the most petted bird species across the globe. This is due to their playful and active personality. Their social nature helps them form an extremely close bond with their mates; in the wild and captivity.

For the negative personality trait, there is hardly any except the usual mild aggression during the breeding season. But while comparing lovebird vs budgie personality traits, budgies would sure have a little upper hand.

Just like the other two competitive parrots in the same-size category, parrotlets too, are active, social, and playful. But they are more like lovebirds than budgies; aggressive and strong-headed.

They guard their territory and toys fiercely. That said, they can be cuddly and affectionate if they form a bond with their owner. And like lovebirds, they, too, prefer their kind over humans if kept in pairs.

Considering lovebird vs parrotlet personality, they are almost alike: hot-heads in small bodies.

Whenever a gentle parrot species is deliberated upon, cockatiels’ name surely crops up. Though not cuddly, they are probably the most affectionate parrots out there.

Add their social and playful persona to it, they love to hang around with their human mate all day long. This keeps them happy and entertained. Lovebird vs cockatiel personality discussion would often end up in praises for cockatiels though.

Known for their comical, goofy, and spunky personality, Quakers are the most fun-loving parrots. They are super active and playful beings and need constant care and attention to help channelize their energies positively.

That said, they too can have their off days, especially during the breeding season. This often gives rise to their territorial and aggressive bouts. But when lovebirds vs Quaker personality comparison is discussed, lovebirds are found on the ‘more aggression’ end of the scale.

Lovebirds need to be consistent in their training for routine activities and taming, et al. Once taught well, they retain their lessons and rarely go back on them. Thus, lovebirds tend to be great learners.

Though budgies respond well to training, they need them rigorously and continuously. Missing their training sessions for a week or two might push them back to square A. There might be a few exceptions but most of the studies conducted on them support the statement. The ‘lovebird vs budgie training needs’ fight is in the lovebird’s favor.

Parrotlets, too, respond well to training. With their curious nature, many of the subspecies tend to learn human speech quite quickly. And deciding between the lovebirds vs parrotlet training capabilities, parrotlets win as they tend to learn and retain for longer than when compared to lovebirds.

Just like budgies, cockatiels too are easy to tame. But unlike budgies, they tend to retain what they have learned even if there is a little break in sessions. From whistling to mimicking to learning human speech, their training can bring wonders in terms of results. For a quick lovebird vs cockatiel training comparison, cockatiels are better at grasping human speech and memorizing it all.

Probably the best talkers of small and medium-sized parrot groups, Quakers are extremely easy and rewarding to train. From learning huge vocabulary to mimicking routine sounds in the best manner, they are adept at doing it all in the shortest possible time. Comparing lovebird vs quaker training sessions? Quakers would surely be claimed clear winners by most experts.

They have unusual screechy squawks that might not fit well in an apartment-kind setup. And these get even louder and ear-piercing if the lovebirds feel bored or angry. And with hardly any ability to learn human speech, their voices are more disturbing than entertaining, especially to the strangers/neighbors.

They can’t be termed as loud in terms of decibels. But their constant singing, whistling, chattering, or mimicking human speech might be disturbing if someone likes pin-drop silence. Male budgies can be noisier as they are more inclined toward speech learning than females. That said, they still are great apartment pets as they win the ‘lovebird vs budgie noise level’ war.

Like budgies, they can also learn quite a few human vocabularies. But they cannot squawk or screech. Just soft chirps or low-volume vocabulary practice sessions during the day. They can, thus, be housed in an apartment too. Deciding between the lovebird vs parrotlet noise levels, parrotlets surely win.

A gentler parrot species, cockatiels are known as great apartment pets. Males tend to be noisier than their female counterparts. Nonetheless, with limited speech abilities, their noise is mostly limited to whistles and goofy mimics. They are on the lower spectrum of the ‘lovebird vs cockatiel noise level scale’.

Of all the widely adopted parrot species, Quakers are on the top slot of the noise charts. There is no point to ponder much on ‘lovebird vs quaker noise levels’ as quaker is a clear winner with squawks reaching 113 decibels.

Compatibility with other parrots

Known to like just their kind, lovebirds are infamous for attacking anyone living with them in the same cage. Not only this, the docile species might end up losing their lives. Small-sized cage mates like finches or budgies often bear the brunt of their unprovoked aggression.

The calm budgies are well known to be social enough to live peacefully with other species like cockatiels. They prove to be the best cage mates, especially if all the varied species are reared together early on. But in a ‘lovebird vs budgie cage fight’, budgies have been reported to be hurt.

Like lovebirds, parrotlets can be territorial too and might end up picking fights with their cage mates. So much so that sometimes the males end up fighting with their female mates, just to claim their territory. But studies have shown them, sometimes, forming great bonds with smaller species like budgies if raised together early on. But it might be risky to witness lovebird vs parrotlet cage fights, as any of them could lose their lives.

Tolerant of almost all species, Quakers can be easily housed with parrots of similar or smaller sizes. But such a relationship thrives best if all of them are housed early in their ages. That said, they tend to become territorial during the breeding season. Also, to know who wins the lovebird vs quaker cage fights, it is best not to test such a situation as any of them might end up hurt.

When it comes to finding lovebirds’ competitor pet parrots, the above four species are the most searched ones. If at all, lovebird vs conure might pique the interest of a few. Where they would rank almost the same when it comes to fun-loving behavior, the aggression of lovebirds makes them a little less appealing. That said, the extremely high noise-levels of conures might be a put-off for apartment dwellers. Choose a lovebird if in an apartment setting.

For the training sessions, conures can be a bit difficult to tame and might need more consistency and persuasion if compared to lovebirds. And if the plan is to add too many cage mates, go for a conure species rather than a lovebird. But again, the key is to house them all together, early on. 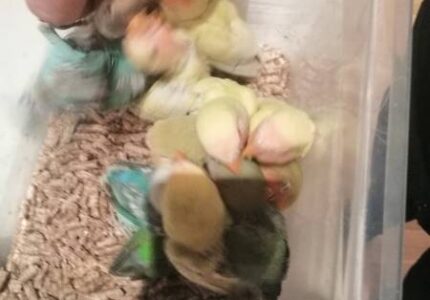