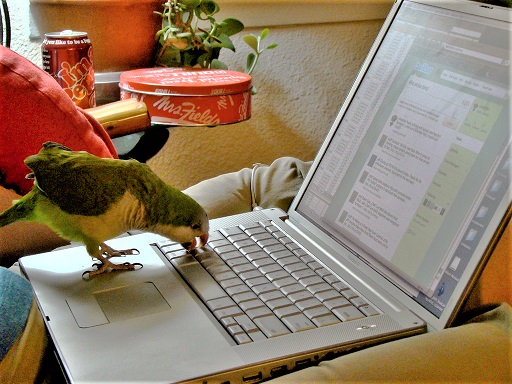 There was a time when having a “birds’ brain” was considered to be an insult. But our avian friends have turned this into a mighty compliment. Crows, ravens, parrots, pigeons, and many more bird species have very well developed auditory as well as visual senses. Pigeons have saved many lives during both the World Wars by acting as military messengers; crows possess excellent problem-solving abilities; and parrots have been proven to possess extensive communication skills, great memory and an intelligence quotient of a 5-year-old human. The most favored bird pet on the earth, parrot, has proven his intelligence among the whole bird species.

‘Dolphins and Elephants are the smartest after primates; human and non-human’ is a passé. Birds have proven their cognitive and intellectual abilities scientifically too. Talking specifically about parrots, they have a similar brain structure to the primates and this fact has been proven by a Canadian team of neuroscientists, as per a report published by Forbes.

Parrots have a much larger forebrain than other birds. This makes the brain pack more of the neurons which is the deciding factor for intellectual abilities. The more neurons, the smarter the species is.

Although there are around 393 species of parrots, many of them like the African Grey Parrot, the Macaws, the Amazon Parrot, Cockatoos, all have proven their intelligence time again but there are one species whose intelligence has been long ignored and it’s none other than our very own little Quaker Parrot. It is inevitable for a Quaker to be intelligent as well for he is a parrot only, one of the most intelligent avian species. Nobody has specifically mentioned Quaker parrot intelligence in particular, but that doesn’t imply he is any less smart than his other cousins. His superior mental abilities can be justified with the excellent skills he shares with other parrot breeds.

Quaker parrots are excellent talkers. They possess a huge collection of vocabulary, words, and phrases. Learning and talking are important cognitive abilities. Quakers beat even the larger parrots when it comes to talking with clarity. They are known to use their diverse vocabulary in the most pleasant tone. Teach your Quaker words like ‘hello’, ‘good morning’, goodnight’ and it is not uncommon to see them practicing these to master them.

Talking is one thing but talking with context to a situation is what makes it an intellectual ability. Leave it to Quakers to use their communication skills at the most appropriate time. A morning greeting with ‘good morning’, a ‘hello’ to a guest entering the house, ‘bye-bye’ while we leave for work, is big enough to prove that our Quakers talk only what is important and where it makes sense. No one of us will ever be greeted by our Quaker by saying ‘bye-bye’ when we come back from work in the evening.

There have been testimonials of the Quaker owners of claiming their Quaker making meaningful sentences, never being taught, by joining only the words they have been taught. One such experience shared by a Quaker owner of her Quaker getting disturbed from the noise while she and her husband were watching the Independence Day fireworks on TV. It was way past her Quakers’ bedtime and suddenly she was surprised to hear him saying, “Shelly! Be quiet!. C’mon. Time to go night-night.” She was impressed by her Quaker joining the phrases on his own and putting them across as a meaningful point. And this is just not the only true instance, you will find many of such experiences on Quaker parrot forums.

Quaker parrots are known to be an extremely social bird by nature. Quakers love to chatter. Many owners often adopt them in pairs to keep them from getting bored. They love being with their ‘flock’. They tend to recognize their mates and young ones well too. Quakers are also known to be very loyal to their owners if a close bond is developed. All these bonding activities with other beings require a prerequisite of identifying them which is possible only when a species has good cognitive functioning.

Another proof of Quaker parrot Intelligence. Having the ability to memorize things is recognized as being intelligent. You will see your Quaker pick words very quick after hearing it from you and will blow your mind by using it perfectly. Answer your phone call with ‘hello’ and the next time it rings, he’ll say ‘hello’ before you can and will put you in a tight spot.

Not only words, but Quakers are also good at memorizing various other sounds, especially, whistling and singing. These two are their favorites and they will whistle the exact tune or sing that song perfectly, they heard on the radio or TV. Memorizing your voice and distinguish it from others is also a sign of a great memory. A Quaker will never forget his owner’s voice or of all his family members.

The lower part of the brain of parrots is similar to that of humans’. They tend to have the largest hyperstriatum, which is the seat of intelligence in birds. This part is what makes one mimic and learn by association. This gives them a higher level thoughts like needing entertainment when bored, getting social with others, enjoy music, give meaning to their words or even pre-plan future, just like us all.

Quakers are great mimics. They will imitate a sound to perfection. Sound of a telephone ringing, cat meowing, vacuum cleaner, washing machine, coughing, sneezing, and even imitating our laugh is what makes them pass this test too.

Teach your Quaker the words with the right emotions and actions, leave it to them to associate them at the right time. Many Quaker parrot owners have trained their Quakers to perform tricks for the entertainment and they learn it all very well.

Quaker parrots are the only parrots in the world who make nests, all other parrot species make the hollow of trees or ground their home. And here we aren’t talking about a nest collecting some simple twigs and leaves. Quakers use their architectural intelligence to make a structure that resembles the apartments we live in. It has generally rooms or compartments just like we have in our homes.

Even when not in the wild, their inherent nest-building behavior makes them build a home inside their home i.e. a nest inside their cage. The technique stays the same, only the material changes. You’ll often see long things like pencils, pens disappearing from your house, only to be found inside your bird’s cage as a part of his personal space, his nest.

Quakers also have a sense of manners when it comes to their nests. Just like us all, their brains are developed enough to identify the interfering behavior of the family. They don’t like their privacy being compromised and like any other conscious being, you will see their retaliation.

As much Quakers love to make a nest of their own, a need for tools like rope are required to make a compartment-like structure of that level of perfection cannot be ruled out. The use and application of tools and techniques require analytic thinking. The nests made by the Quakers aren’t the regular bird nests. They are the most complex structures with a living arrangement for the whole community.

Quakers are highly intelligent birds who possess the ability to apply concepts to how a thing is done. Give them that toy and they know how to disassemble it without breaking it. They are also known to be the escape artists as they learn to unlock their cage locks just by observing you. Give them that puzzle toy and they will solve it by applying their conceptual abilities.

Quakers’ intelligence has never been actively the subject of experimentation when it comes to testing. As against their cousins like African Grey Parrot or Macaws, our little birdies have been, by the way, denied the chance to prove their mettle. Be it their exceptionally well talking ability or their perfectly imitated chatter; their ability to whistle and sing songs with perfection or their excellent learning and mimicking techniques; their recognizing ability of their family members and their brood or their know-how of using various techniques to keep these companions entertained; their nest making ability or the civic sense of living in them; Quakers are everything intellectual.

All these cognitive and intellectual abilities are just the tip of the iceberg. Nobody knows how much intelligence Quaker parrot little brains are hiding in there. There have been many Quaker parents sharing varied instances of their Quakers’ intelligence. Claims by them show that these little birds are excellent weavers too, which proves their great artistic mind ability; few Quakers have shown counting and shape identification abilities which prove their analytical brain to be active; many of them show empathy which forms the basis of Theory of Mind. What is missing is just an attempt to understand their little brains and find the depth of the ocean of knowledge he is holding in there, and all this to let us know our babies some more and be a little more proud of them. Quaker Parrot in an Apartment