All about Black-Capped Conure

Famed as the Rock Conure among breeders worldwide, Black-capped Conure belongs to the genus Pyrrhura of the conure kingdom; another genus being Aratinga. They are native to the south-western region of the Amazon Basin along with the slopes of the Andes mountains of Bolivia, Peru, and Brazil. They love to inhabit the humid forest areas ranging from the lowlands to the ones at higher altitudes. Black-capped is often called Black headed Conure.

The average life expectancy of a Black-capped Conure ranges between 10 to 30 years depending on his habitat.

Black-capped Conure Lifespan in the Wild
When in the wild, these conures lack proper care and a wholesome diet that limits their average lifespan to a meager 10 years. Various dangers in the wild from the hunters and predatory animals alike further reduce their probability to live beyond it.

Black-capped Conure Lifespan in Captivity
Being in captivity proves to be a boon for this species and stretches their life to a whopping 30 years or so. Multiple factors contribute to their good lifespan while in captivity. Dedicated care and attention by their human flock, a nutrient-rich balanced diet, and protection from all kinds of probable dangers are just a few of them.

A black-capped conure isn’t known to be a great talker. Black-capped Conures have no comparison to the talking abilities of parrots like African Grey. However, that doesn’t mean that this bird cannot be trained for speech and vocalizations. With dedicated training and repetition technique, the black-capped can learn quite a few words and phrases.

Conures are infamous for being overly noisy. They are neither thought to be great companion birds for the beginners or the apartment dwellers. But surprisingly, Black-capped is adopted by all the bird lovers wanting a rather quiet conure. They aren’t known to be the noisiest parrot either among the kingdom. Though, like any other avian species, they give out their usual morning or evening contact calls that can hardly hurt anybody’s ears.

A black-capped conure attains sexual maturity between 1 to 3 years of age. They like to breed in February and March. During the breeding season, these birds roost in small groups contrary to the otherwise large flocks. A female Black-capped normally lays around 4 to 7 eggs in a clutch.
The eggs are hatched after around 24 days of incubation. The black-capped conure baby leaves the nest after about 7 or 8 weeks.

Like all other living beings, a nutritious and balanced diet is important to keep these birds healthy and hearty.

Like all other bird pets, Black-capped also loves to feed on fresh fruits and vegetables. One can feed the fruits and veggies the way his bird likes them; chopped, sliced, or pureed. Feed them a mix of both and to keep the bird from getting bored, make new combinations of such mixes. Apples, mangoes, fresh berries are few of their favorites. From the vegetables, offer them pumpkin, spinach, broccoli, carrot, or collard greens. Avoid all pitted fruits and remove seeds as they are toxic for the bird.

Pellets
To make up for all lost nutrients in a black-capped diet, feed him a good pellet mix. A high-quality pellet mix has all the essential vitamins and minerals that might be missing from the average diet of the bird. The pellet mix can form around 50-70 percent of a black-capped diet. Going below or above this range often leads to an unbalanced diet.

Seeds
A good seed mix is a must for a black-capped conure, just like all other pet birds. They can be fed either single seed feed or a mix of a few of them. Make a sumptuous mix of chia seeds, millets, pumpkin seeds, etc. Soak the seeds for some time before feeding them to the bird to make it chewable for the bird. Most importantly, seeds are high in fat and thus, must be fed to the bird only in very small quantities. Lastly, it is best to offer them a home-made seed mix over the market-made as the store-bought formula has artificial preservatives added that are harmful to the bird.

Fresh Water
Being a life necessity, Black-capped must have unrestricted access to water that must be fresh and clean. It helps the bird to stay hydrated all the time. The water must be free from any toxic minerals or salts. Hence, it is best-served filtered or boiled-cooled before being fed to the bird. And to keep the supply unrestricted, refill the bowls throughout the day. An extra bowl could be kept as back-up for nights or hotter days.

With a dark green plumage, Black-capped Conures have a customary black cap aka crown. They have white scallopings on the breast and hindneck. The primary or the upper-wing coverts have red edges. The eyes are black and the beak, legs, and feet are gray.

The bird has two subspecies apart from the nominate one, namely;

Pyrrhura Rupicola Sandiae – This subspecies is popularly called as Sandia Conure by breeders and pet lovers. They inhabit the regions of northern Bolivia, south-eastern Peru, and western Brazil.

Apart from the two subspecies, black-capped are known to breed with green-cheeked conure in the wild.

How to Determine Black-Capped Conure Gender

Like most of the parrot species, Black-capped conures also happen to be monomorphic, i.e. there is no visual distinction between both the sexes. The most reliable way to determine the sex of a black-capped is to operate logical testing. However, the experts like seasoned breeders, avian aficionados can guess the gender of this bird accurately by considering a few following simple facts about them

Size of male conure
The male black-capped are slightly larger than their female counterparts. The average size of the male bird could be anywhere between 9 to 11 inches. And the size tends to be uniform among its subspecies.

Size of female conure
The black-capped females tend to be comparatively smaller in size when compared to the males. Their average size may range from 8 to 10 inches depending on individual genetics. And as in males, this size is uniform among all its subspecies.

Weight of male conure
All the subspecies and the nominate males of the black-capped family have a uniform weight ranging between 70-80 grams. And this average weight happens to be higher than their female counterparts.

Weight of female conure
For all the female black-capped subspecies and nominate species, the average weight is slightly lower when compared to their respective male subspecies. It might range anywhere between 60-70 grams.

The Behavior of Black-capped Conures

The Behavior of male conures

The black-capped are generally a calm species of conure family. They are quiet and for most of the time, prefer to stay laid-back. But the breeding season brings a clear distinction between both the sexes. Though famed for being soft and gentle otherwise, the male black-capped gets under the natural hormonal influence and tends to become aggressive and cranky. But this aggression is not as intense as displayed by a few other species of parrots during breeding.

The Behavior of female conures
Female black-capped stays true to their timid and shy behavior most of the time. The only time they show a little aggressiveness is during the breeding season. But the intensity of that aggression seems negligible when compared to their male counterparts.

Black-capped conures attain sexual maturity at an average age of 2 but it is advised to breed them around 3 years of age. Either of the following two sexing tests can be conducted to determine the possibility of breeding the bird.

A calm and shy yet playful and chirpy, black-capped conure species have caught the attention of those conure lovers who are averse to the screeches of this genus. They tend to get attached to their human companion quite quickly. And with no apparent extreme attention, all they need from their human is a little love and a lot of toys in return.

Why is my Sun Conure Biting? Tips for Controlling aggression. 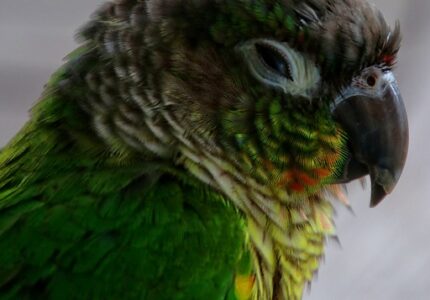