Quaker parrots, also known as monk parakeets, are highly intelligent, funny birds that enjoy imitating what they hear around them. They also enjoy engaging with you, so they’re often starting to pick up phrases when you talk to them. Speaking to them throughout the day is beneficial, but you can also focus on a particular phrase that you want them to say by repeating it for them frequently.

One of the most attractive features of Quaker’s parrot is talking. Such friendly birds can hold conversations and to mimic sounds very effectively. They don’t always do it the way we want it to be. Many people are trying to teach their parrots to talk through the use of tapes or disks. They are often disappointed. Although smaller birds may learn to imitate these recordings like parakeets and cockatiels, bigger birds, including Quaker parrots, don’t begin to speak, although they have heard what sounds like human talking for hours and hours.

Often, the problem is not getting a Quaker parrot to talk — it’s getting him to stop. Quaker parrots mimic almost everything they hear and can associate sounds with meaning. Some birds are slower than others, but your parrot will probably speak out very quickly.

Before you try to strike a conversation, spend a lot of time bonding to your bird by playing outside the cage, talking to it, and sharing food. You also need to be prepared for the possibility that your pet is not just a talker. While all the parrots can chat, that doesn’t mean they’re going to. So, don’t be surprised if your Quaker parrot isn’t talking to you.

Teaching your parrot to speak, or, more specifically, to repeat words and phrases, will help you connect with your pet and grow into a cordial relationship that you both enjoy. Put your parrot in the common area of your home and talk to him all day long, enabling him to be part of the hustle and bustle of family life. Parrots are vocal creatures, although you might have better luck getting males than females.

Widely kept as pets, Quaker parrots rank in the top ten list of talking birds in the world because of their exceptional speaking skills. They are hyper-intelligent species and highly social creatures who enjoy the company of their owners if they are well associated with them.

As the owner of Quaker Parrot, you need to train your little new family member properly, just the way we all do with human babies. Be prepared to develop a good relationship with him when you accept him home by devoting enough time to his learning sessions. You need to prepare him for the beautiful life you’ve got in store for him.

Without much effort, many Quaker Parrots learn to speak. Generally, these are the words we use throughout the day that they pick up without us understanding.

For example, if there is a phone in the house, when you pick it up, you say’ Hello.’ Your bird will start imitating you slowly. It can and will surprise you by mimicking sounds that it hears around the house, or just outside, such as the whistle of a kettle, sound of the car, or even the trring-trring of the doorbell!

We recommend that you handle your time while teaching words and phrases. After all, you won’t enjoy the shouting of your Quaker Parrot “Not again!”The next seventy years, every time you walk through the door! (Yup, that’s how long those big birds are going to live with a good diet and health care).

You can also use speaking tapes and Dvds to teach your Quaker Parrot to speak. Although they are not very parodying effective, they are valuable resources to enhance the expressions the bird has already mastered.

Nonetheless, intense and thorough communication is the most effective way for a Quaker Parrot to learn new vocabulary. As a way of social interaction, these birds learn to “talk.” They’re going to repeat your sentences to please you, communicate with you, entertain, and feel like part of the’ flock.’ If this pretty bundle of colored feathers does so much to attract your attention, is it not ethically right for you to give in return total love? Laboratory studies indicate that with social interaction, Quaker Parrots learn the most.

You should communicate with the bird during a one-on-one training session to include the’ Association’ process, which is one of the easiest ways to train a Quaker parrot to talk.

By associating words with objects, events or even emotions and labeling them for the bird, you are lifting its ability to perform a response-based tête-à-tête that can further enhance any bird owner’s satisfaction. Present your pride and see it winning the hearts of all. It can be achieved by chance or purposely. Repeat similar words with animation every time you do something while attentively watching your favorite pet Say, for example,’ see you later! Or’ nice to see you when you leave the house! If you come back. After a while, the Quaker Parrot will equate your arrival and departure with these phrases. It’s going to wave you goodbye and give you an equally enthusiastic welcome.

Increasing enthusiasm and excitement in your voice is the best way to encourage your Quaker Parrot to imitate you. When you repeat in an enthusiastic voice the desired response with ample detail, these words will soon be imitated by the bird. You have to praise him when he does that for providing the desired response. You have to understand that there is no conversation between a Quaker Parrot. It would just like your attention and approval.

Speak clearly and loudly to allow him to mimic human sounds, emphasizing each syllable. Words said with enthusiasm is easy for Quaker Parrots to understand, using strong consonants. You must therefore refrain from using foul language within your Quaker Parrot’s audible range. With full zeal and understanding, we still end up uttering profanity. We fail to know them very quickly from Quaker Parrots. As it is, it’s hard to teach a Quaker Parrot to chat. Then it is tougher to teach it to forget something. The patience, tolerance and perseverance that you need to make your Quaker Parrot forget something is twice as much effort as you need to teach some basic vocabulary.

Most Quaker Parrots mimic your whistling easily as they identify it as a funny sound. It’s their high pitch why they like it. But if you’re yourself a terrible whistler, the Quaker Parrot will also whistle badly. Then do not blame it! Since imitation is the key to making your Quaker Parrot chat, here are a few methods that you will find really useful during your workout:

If you want to speak well and pick up a lot of vocabulary from your quaker parrot, he needs to be involved in your house life and day-to-day activities. Instead of leaving him alone in his cage while you’re doing homework, reading or watching TV, keep him with you and talk to him as you do your thing. The more he gets used to listening to human speech, the easier it is for him to imitate it, so keep talking to him about anything and all.

Positive reinforcement is the best way to foster positive habits, so praising and rewarding your Quaker parrot can help you learn to communicate faster. Every time he says a word, get excited and praise him so that he knows he’s done well. You should bribe him with a tasty treat now and then, such as a seed or a piece of fruit— but not every time he speaks; otherwise, he might end up a chubby chirper.

You will help your quaker parrot learn a word or phrase quicker by adding a visual reference to your classes. For example, as you try to teach him to say “goodbye,” try to repeat the word as you leave the room. He will connect you with the term after a while and will say it every time you leave the house. Not only will he learn more quickly, but you can also train him to say certain things in order efficiently.

Repeat words or phrases you’d like to hear from your feathered friend. When it hears you say something quite often, by recollecting them, the Quaker Parrot may begin to mimic the words. Maybe it’s meant to be an effective form of communication between you two.

It works better, as a rule, if you give the bird the treatments they want. For example, give a grape to your pet, but repeat the word ‘ GRAPE’ many times before you hand it over. The bird will soon begin to equate the term it’s hearing with the object it’s getting. Do this regularly and see your Quaker Parrot say “grape” whenever you want a grape!

Knowing WHEN your bird is willing to learn something is essential. Sometimes you may notice it stops whatever it was doing and looks closely at you. As you speak or whistle, your pupils will change. It illustrates that he is ready to learn. This is the perfect time to get started. You can now draw up a list of words or phrases you want to teach. To maintain the attention of your pet, remember to begin with simple syllables and phrases. Too many hard-to-mimic words will only prevent him from making additional attempts. You’ve got a heart. Don’t pressure the sweet, poor bird.

You also need to remain calm and patient because, at the very first attempt, not all Quaker Parrots will mimic your voice. Unlike humans, in their first attempts to learn a new skill, Quaker Parrots will also flounder. With your initial efforts, no matter how disappointed you get, don’t let it reach your voice. Look enthusiastic as you repeat the words that you teach. A bored “Hello” won’t get you an enthusiastic response, but you might just get an excited “Hello!”

Here are some tips to get you started:

Conclusion
Teaching the Quaker to talk is what we all aspire to do by teaching the parrot to say words and sing. To use your little pet’s speaking skills and his love of music, begin to utter the same words in front of him in each training session until he begins to repeat them effectively.

You can begin by teaching him a set of essential words such as hello, bye-bye, thank you, love you, and then expand their vocabulary by introducing a few words at a time. Don’t forget to check the vocabulary from time to time with which he has learned. The easiest way to sing is to sing rhymes before him in the tone you want him to learn them for the singing training. Once he starts picking up the rhymes, teach him the same method of repetition with your favorite songs.

Some of the pictures are taken from wikipedia.org 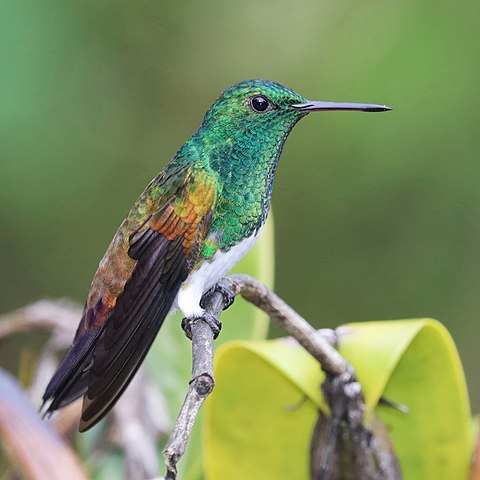 Hummingbird as a pet