Famed as the clown of the parrot community, Caique looks like a canvas at the first look. A beautiful mix of yellow, green, orange, and white, this vividly colored parrot has an equally colorful personality. Though mischievous, playful, and comical, they are quite infamous for not liking any company inside the cage. But what’s the truth? Do Caiques get along with other birds? Or they don’t? Let’s get started.

Can Caiques and Other Birds get along?

Caiques are quite aggressive parrots. And they make sure they show their anger to all their cage mates. Though not impossible, there are very few Caique owners who would not have complained about their Caique attacking their other pet birds. This is due to Caique’s extremely territorial nature. And those pet Caiques that have managed to get along with other birds are the ones that were either born and brought up or adopted together at infancy.

So, adopting Caique with other birds together early on seems to be an effective solution. This brings up the next big question in a parrot lover’s mind. Do Caiques get along with other parrots? And if they do, which species are their most favored companions? Let’s study their behavior around some of the most common parrot species:

There is one common characteristic of Caique and Quaker, getting territorial. But the major twist of housing them together is that Quaker gets territorial only during breeding season due to being high on hormonal changes but Caique keeps putting Quaker in his place all around the year. So the fights are bound to happen all the time.

Likes repel. And being stubborn, mischievous, and aggressive, both Caique and Conure are very much alike. This makes them repel each other, being Caique calling the shots. Conures are known to be beaky and territorial but while cohabitating with a Caique, they realize what real aggression is. Barring the noise, Caique’s all other head-strong behavioral traits are much more magnified than conure. So do Caiques get along with conures? No, not at all.

Caique and Cockatiel combination is like fire and ice together. Aggressive and mischievous Caique housed with gentle and shy Cockatiel, probably not much guess is needed to foresee what will happen next. Many pet owners have complained of Caique wrestling down their cockatiel for no apparent reason, which forced them to cage separately for Cockatiel’s safety.

African Grey is known to be a sensitive species who takes everything to heart. Though they are moody, these mood swings are generally milder depending on the attention they get from their owner. But attention or not, Caique is always moody and nippy and at a much higher intensity than a Grey. And if an owner thinks that Caiques wouldn’t mess with a large bird, like Grey, they should be ready for a shock of their life after housing them together.

Eclectus happens to be more gentle parrot species which has made them common in the household with children. But due to their playful nature, they like a spacious cage, preferably all to themselves. And this makes the point of argument between a Caique and Eclectus living together. Where Eclectus wants his space, Caique would never let it be.

Though extremely adorable and chirpy, Parrotlets can be moody, nippy, and aggressive if ignored by the owner. But that is all they have. Given their small size and sweet personality, they lack the intensity that a Caique is born with. With intense aggression, they can take a Parrotlet head-on ending up harming the little bird.

Senegals are famous for being cuddly and affectionate little parrots who get aggressive once in a while if ignored. All they want is to cuddle all day long, especially with their human mate. Not that Caiques can’t be cuddly. Many Caique owners are happy to have a cuddly companion parrot. But then, it all gets down to the timing. If they get fond of each other early on in life, they can be best of friends. But never lose sight of them.

Famed for his easy-going and gentle personality, Pionus isn’t kept as a pet by many. They say these birds are so less captivated that one Pionus owner hardly meets another in person. Coming back to their personality getting along with the loud and bossy Caique, it still seems a distant reality. A territorial Caique would someday attack a gentle Pionus even if they happen to be great friends. This is because of Caique’s inherent territorial nature and Pionus choice to go easy on him.

Coach of the parrot kingdom, Lorikeet, has no stop button all day long. They simply want to play. But given their small size, they must not be mistaken for lacking strength and aggression. In both these behavioral traits, they can put big parrots to shame. And they surely aren’t the ones to take other’s bossing-around easily. If caged with a Caique, a Lorikeet would fight back. They hate anybody else gaining dominance when they are born with it. Hence, refrain from keeping them in the same cage. Read more about Lorikeet Types Here.

One of the most cuddly pet parrots, Lovebirds, is fun and playful and forms a great companion bond but with only who responds the same way. This is the highlighting feature of their personality. Once they form a bond, it needs to be nurtured. Otherwise, they fall into depression. A Caique and a Lovebird bond is not impossible to form. The Lovebird would want to keep Caique to himself all the time and if Caique tries to interact with anyone else, Lovebird will feel jealous and get nippy. Being a Caique, he is bound to respond. And the outcome wouldn’t be happy, given the fact that Lovebirds are half the size of Caiques.

Even if the above-mentioned situation never arises, a Caique is bound to have mood swings and feel territorial and aggressive now and then. So whether it be a Caique or Lovebird or the Caique or Senegal cohabitation, keeping an inherently aggressive and moody parrot is never a good idea with a cuddly and gentle bird.

While living with pet dogs and wanting to introduce a Caique to them, one must consider clipping their wings. A bird when flutters close to a dog scares the latter, making him react weirdly. It is better to let the dog get comfortable with Caique first before that fluttering happens. Cuddling the Caique in front of the dog makes him soft towards the bird. Once the bond develops between the two, a flight taken by Caique won’t scare the dog.

It must also be noted that dogs aren’t very fond of nipping and Caiques are extremely playful creatures. This will end up with the dog hunting down the bird. So, they must never be left alone without the owner’s supervision as mishappening can happen in such a case.

Caique males carry more aggression than Caique females. This remains true even during the breeding season. Some people are of the view that Caiques should be kept in pairs as they are very playful and require constant interaction. Considering to buy a male and a female Caique in such a situation will help the owner. This keeps the bird happy even during the owner’s busy schedule.

Caiques not only behave aggressively with other species but also among themselves. A small fight over a trivial matter might become big in the form of one pet kicking the other with full force. Providing adequate space for both will help here.

If, however, one would like to choose either Caique female or male while bringing one home, it is better to know beforehand that males are available more commonly in the market. With limited availability and soft nature, female Caiques come at a heftier price tag than their male counterparts. The difference in gender can only be confirmed by an expert as it cannot be determined visually.

Though Caiques are aggressive and territorial, they can adjust with other species in some situations. To keep them at peace with any other pet, adopt them early on together. At a tender age, they can hardly differentiate between species and by the time they grow up, they will develop a strong friendly bond. Keeping a constant eye over your pets placed together and providing them individual cages will help you develop a safer environment for all. 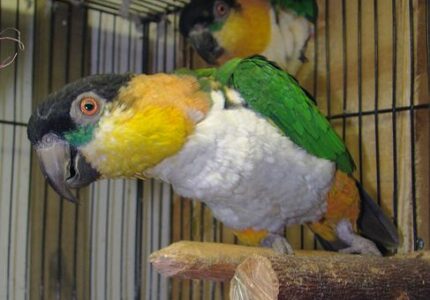 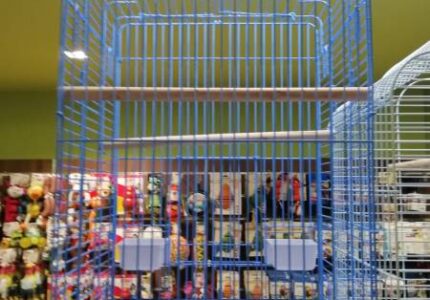 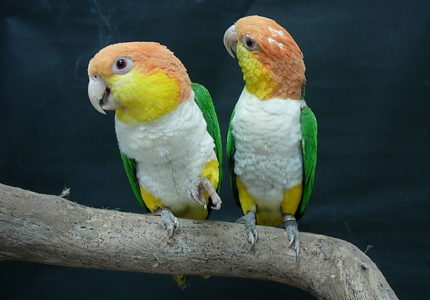